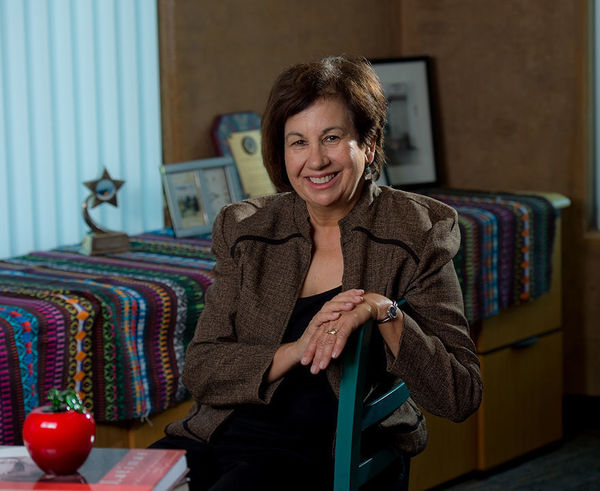 History has captivated Vicki L. Ruiz since childhood, beginning with the family stories recounted by her mother and grandmother at the kitchen table. The everyday struggles and accomplishments of food-processing workers, field hands, and daring flappers have informed her sense of the past. Throughout her work she has delineated how the journeys of immigrants and their children entail not only a physical movement through space but also an internal dimension, as old selves are tested and new identities fashioned. In this process, individuals make decisions within the constraints of shifting social and economic conditions. Questions of how people have defined themselves as Americans across class, gender, race, cultures, regions, and time continue to pervade her research. As her publications reflect, Ruiz is driven to tell untold stories and to reveal lessons hidden in the shadows of history.

A path-breaking scholar and teacher of Chicano/Latino history, Ruiz has contributed to the reshaping of US women’s history, labor history, immigration studies, and history of the US West. She has produced 14 books and edited collections, as well as more than 60 essays, garnering numerous awards for research, teaching, and community contributions. In 2012, she was inducted into the American Academy of Arts and Sciences. Furthermore, that she has been elected president of the American Historical Association, Organization of American Historians, Pacific Coast Branch of the American Historical Association, American Studies Association, and Berkshire Conference of Women’s History reflects the esteem in which her leadership is held.

In the course of a career that began in the Texas borderlands, Ruiz has traversed the US West, going in 1985 to the University of California, Davis, where she gained tenure. In 1992 she went to the Claremont Graduate School as the Andrew W. Mellon All-Claremont Professor in the Humanities and married Victor Becerra, an urban planner and community organizer. Three years later they moved to Arizona State University. They returned to California in 2001 when she joined the faculty at the University of California, Irvine, where she has been recognized as Distinguished Professor of History and Chicano/Latino Studies; she has also served as dean of humanities and presently chairs the Department of Chicano/Latino Studies.

From the outset, a hallmark of Vicki Ruiz’s work has been illuminating the importance of networks of kin and friends in women’s lives. Her prolific publication list includes Cannery Women, Cannery Lives and From Out of the Shadows: Mexican Women in Twentieth- Century America and co-author of Created Equal: A History of the United States. She and Virginia Sánchez Korrol co-edited the three-volume Latinas in the United States: A Historical Encyclopedia, which received a 2007 “Best in Reference” Award from the New York Public Library.

In addition to her research, Vicki Ruiz has played an important role in building the field of Chicana/Latina and US women’s history through mentoring a constellation of scholars. When she graduated from Stanford in 1982, Ruiz was the fourth Mexican American woman to earn a doctorate in history; three decades later, there are approximately sixty, of whom she directed the dissertations of nine. Twenty-three PhD advisees have completed doctorates under her supervision, and she has served as a committee member for many more. She has also mentored eight postdoctoral fellows—all scholars of Chicana history—under the auspices of the Ford Foundation Program, UC President’s Program, and Woodrow Wilson Program. In 2015 her former students gathered at UC Irvine to honor her with a conference entitled “Nuestra América: Rethinking Fronteras in US History”; their presentations revealed the legacies of her intellectual rigor and generosity. The qualities that have made her a “peerless mentor” shine in the words of her former advisees.

Throughout her career, Vicki Ruiz has devoted time to providing guidance and resources to high school and undergraduate students as well as to K–12 teachers. At UC Davis she co-founded and directed Mentorships for Undergraduate Researchers in Agriculture, Letters, and Science, an ongoing program that pairs professors with students of color and women in underrepresented fields to work on collaborative research projects. At Arizona State University, Vicki twice received a Community Recognition Award for her involvement in the Hispanic Mother-Daughter Program that offers workshops, field trips, and mentoring to encourage college-bound goals. At UC Irvine she has served as the interim director of Humanities Out There, once the university’s signature community engagement program, as well as co-organizing a teacher-training seminar for the Gilder Lehrman Institute of American History. As her lengthy CV reflects, she has given service on local, regional, and national levels to a host of organizations, including the National Museum of American History at the Smithsonian and the National Endowment for the Humanities.

Heeding this admonition, Ruiz has returned to the project that first inspired her: a biography of Luisa Moreno/Rosa Rodríguez de Bemis. Ruiz describes her as a “quintessential transnational subject” who invented and reinvented herself in the process of crossing physical and intellectual spaces: Moreno’s activism began early with the publication of her feminist essays in her native Guatemala; while still a teenager she departed for Mexico, later moving to the United States. Garnering experience as a journalist, poet, and garment worker, she became an eloquent civil rights advocate as well as labor organizer. She left the country “under warrant of deportation” in 1950. Moreno’s career offers a window into the linkages among feminist, labor, and civil rights struggles in three nations—as Ruiz writes, “Her life demonstrates why Latino history matters to US history.

In September 2015, President Barack Obama honored Vicki L. Ruiz with a National Humanities Medal in recognition of her achievements in broadening public engagement with US history. As a scholar, teacher, mentor, and leader she has deepened understanding of a more complicated, diverse, and rich past, inspiring researchers and igniting the imagination of audiences beyond the ivory tower. Developing projects of increasingly wider scope, she has illuminated Latina and Latino experiences as an integral part of American history. In every realm of her work Ruiz reveals the power of stories in shaping our lives and dreams, the potential for community organizing, and the importance of the choices we make every day.