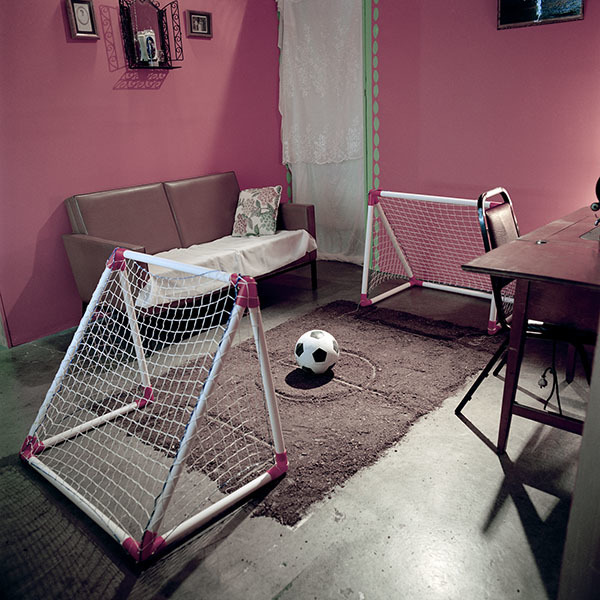 Counter-Archives to the Narco-City is a curatorial project on art and human rights, co-curated by Tatiana Reinoza and Luis Vargas-Santiago, that offers alternative views to the media spectacle of narco-violence in the Americas. Hosted at both the University of Notre Dame’s Snite Museum of Art and the Notre Dame Center for Art & Culture, the first edition of this ongoing project features the work of visual artists Adriana Corral and Alma Leiva and focuses on the counter-archives of two cities: Ciudad Juárez, Mexico, and San Pedro Sula, Honduras. These are two of the deadliest cities in the world, as well as industrial centers and migration points with thriving narco-economies that corrupt their political structures and terrorize everyday life. Rather than repeating spectacular images of violent public crimes, this exhibition aims to give voice to those who live intimately with violence in contemporary Latin America and document everyday forms of resistance against the societal structures that sustain the chaos.

The Counter-Archives to the Narco City exhibition at the Snite Museum will include, Impunidad, Circlo Vicioso, 2015 and the installation, Within the Ashes, 2013, both by Adriana Corral, along with nine photographs by Alma Leiva from her series Celdas (2009–15).

Adriana Corral’s installations are part of her series Campo Algodón and reflect her research on gendered and state violence in Mexico. Corral specifically deals with a high profile legal human rights case where the bodies of eight young girls were found violently murdered in a cotton field in the center of Ciudad Juárez in 2001, and the recent enforced disappearance of the 43 Ayotzinapa rural student teachers in Iguala, Guerrero in 2014. Corral’s work enacts a counter-archive by dwelling on these tragedies, the purposeful amnesia, the counter-memory of these victims, and a broken legal system that obscures state and organized crime violence.

The nine installation-based images from Alma Leiva’s series Celdas highlight the dislocation of everyday life in San Pedro Sula, the deadliest city in the world. Through meticulous reconstructed interiors of working class homes she stages absurd interventions that bring the outside world inside. Drawing on affect, memory and trauma, Leiva’s photographs perform as a feminist counter-archive to the narco-terror and gang violence of Honduras. While overwhelming us with intimacy, her work makes visible the way homes act as prisons and sanctuaries, recording the effects of physical and psychological violence.

In October 2015 the artists will return to create a site-specific installation at the Notre Dame Center for Arts & Culture for their annual Día de los Muertos/Day of the Dead program.

A public reception and opportunity to meet the artists and co-curators will be held at the Snite Museum of Art from 4:00­–6:00 p.m. on Thursday, October 8, 2015.

A series of presentations, dialogues, and workshops during the semester will provide students, faculty, and the general viewing audience opportunities for insight, education and reflection about the persistence of human rights violations and the role of art in speaking out for social justice.

This exhibition and its associated bilingual exhibition catalogue are sponsored by the Snite Museum of Art, the Notre Dame Center for Arts & Culture, the Institute for Latino Studies, the National Association for Latino Arts and Culture, and Southwest Airlines.

High-resolution images and catalogue texts are available upon request