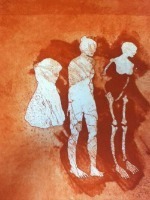 A panel discussion, featuring presentations by three distinguished scholars, addressing ideas and issues surrounding Latin American immigration and fundamental questions of identity, integration, and human rights. In addition to the three presentations, the panel will respond to questions from the audience.

An event co-sponsored by the Institute for Latino Studies

Claudia Bernardi is Professor of Community Arts, Diversity Studies, and Visual and Critical Studies at the California College of the Arts. An internationally-known artist, she works in the fields of art, human rights, and social justice, combining installation, sculpture, painting, and printmaking. She recently began focusing her art praxis in community and collaborative art projects, working with and in collaboration with communities that suffered state terror and violence as well as with victims of human rights violations. Professor Bernardi has exhibited her work nationally and internationally including at the International World Peace Center in Hiroshima, Japan; the Centre for Building Peace in Donegal, Northern Ireland; the Tokyo Metropolitan Museum of Art; DAH Teatar in Belgrade, Serbia; the University of Haifa, Israel; Movimiento de Arte y Cultura Latino Americana (MACLA); and the Center for Latin American Studies at the University of California at Berkeley.

Paolo Carozza is Professor of Law and Concurrent Professor of Political Science and Director of the Kellogg Institute for International Studies at the University of Notre Dame. His expertise includes comparative constitutional law, human rights, law and development, and international law, and his research is focused on Latin America, Western Europe, and international themes as well as relationships between law, human rights, education, and integral human development. Formerly the director of Notre Dame’s Center for Civil and Human Rights, he directed its doctoral program in international human rights law for a decade. He is the author of numerous books, including Italian Constitutional Justice in Global Context (with Vittoria Barsotti, Marta Cartabia, and Andrea Simoncini, Oxford University Press, 2016), Comparative Legal Traditions (with Mary Ann Glendon and Colin B. Picker, 4th ed., West Academic Publishing, 2014), and Regional Protection of Human Rights(with Dinah L. Shelton, 2nd ed., Oxford University Press, 2013). He has served the Holy See in various capacities and was appointed by Pope Francis in 2016 to be a member of the Pontifical Academy of Social Sciences.

Timothy Matovina is Professor of Theology and Co-Director of the Institute for Latino Studies at the University of Notre Dame. He works in the area of Theology and Culture, with specialization in U.S. Catholic and U.S. Latino theology and religion. His most recent books are Latino Catholicism: Transformation in America’s Largest Church (Princeton University Press, 2012), the edited volume Virgilio Elizondo: Spiritual Writings (Orbis Books, 2010), and Guadalupe and Her Faithful: Latino Catholics in San Antonio, from Colonial Origins to the Present (Johns Hopkins University Press, 2005). Research support for Matovina’s work encompasses competitive grant awards from nearly every major funding source that supports academic work in theology and religion, including the National Endowment for the Humanities, the American Academy of Religion, and the Association of Theological Schools. Among his various scholarly awards, in 2010 Matovina received the Virgilio Elizondo Award "for distinguished achievement in theology, in keeping with the mission of the Academy" from the Academy of Catholic Hispanic Theologians of the United States (ACHTUS). In addition to his scholarly work, Matovina offers presentations and workshops on U.S. Catholicism and Latino ministry and theology throughout the United States.