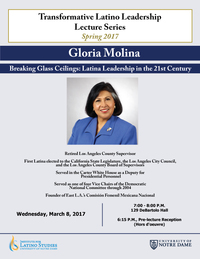 As part of the Institute for Latino Studies' Transformative Latino Leadership (TLL) Lecture Series, special guest Gloria Molina will present a public lecture at 7:00 p.m. titled "Breaking the Glass Ceilings: Latina Leadership in the 21st Century" on Wednesday, March 8th in 129 DeBartolo Hall. A pre-lecture reception will begin at 6:15 p.m.

Molina was first elected into office as a State Assemblywoman for the 56th district in 1982, serving from 1983-1988. She was then elected to serve as a Councilwoman of the first district to the Los Angeles City Council where she served from 1988-1991. She also served on the Los Angeles County Board of Supervisors from 1991-2014.

Prior to her public office service, she was elected to serve as a Deputy for Presidential Personnel under President Jimmy Carter's White House Administration.

Amongst one of her greatest achievements is the founding of East L.A.’s Comision Femenil Mexicana Nacional. An organization dedicated to the enhancement of Chicana/Latina women throughout the country.