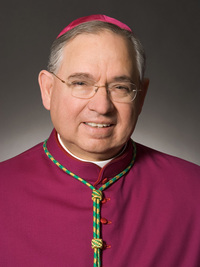 Most Reverand Gomez, Archbishop of the nation's largest Catholic community, was born and raised in Monterrey, Mexico. He currently serves as the Vice President of the United States Conference of Catholic Bishops and was appointed by Pope Francis to the Pontifical Commission for Latin America.

His most recent publication, Immigration and the Next America: Renewing the Soul of Our Nation, has played a vital role in the church's efforts to support immigration reform.