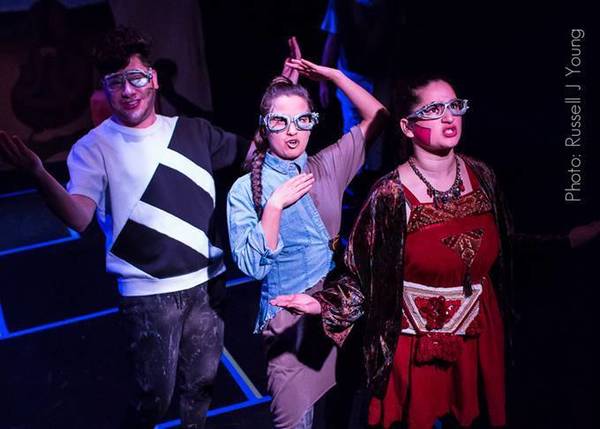 Inspired by the book Flatland, by Edwin Abbott and set in the year 2073 in Tierra Plana, a new nation of squares, walls, and all sorts of boxes, Bi– will break open the boxes of selective classification and raise the question: “What is your ‘bi-dentity?”

Bi– is a story of “What if” of an unknown place and time, in which geometric beings created their own societal classism.  New York based playwright and director Georgina Escobar says; “This piece uses mathematical and geometrical metaphor as well as inspiration from interviews from people in the community to tug at the heartstring that often makes us feel a little too much like ‘the other’ we don’t belong.” In the tale of Bi–, Tierra Plana is a place where young people want to break out of categories and face the dangerous unknown in a brave new world.  “Bi– is simply about expansive thinking and it will challenge its audiences to join a ride that could feel strange and foreign, but then again, isn’t that what all people who claim a dual identity (bi-nationals, bilinguals, bi-cultural) have to navigate in dealing with a homogeneous society? ”

The 2018 world premiere of Bi– is devised and directed by Georgina Escobar, and developed with Dañel Malán and Ajai Terrazas Tripathi through a collection of personal interviews of individuals with dual identities. Infused with poetic narrative, dance movement choreographed by Gabriela Portuguez, and surreal entourage of illumination and design, Bi– will examine the spaces in between labels and intersections of identity. TeatroMilagro’s touring actors Kenyon Acton, Sierra Brambila, and Justin Charles round out the creative ensemble.

Bi– is paired with Teatro Milagro’s UNIDAD curriculum in which students take theatrical workshops that address bullying, harassment, and student isolation by focusing on themes of identity, stereotypes, and community support.

This event is part of the Institute's Hispanic Heritage Month Celebration.

To reserve your tickets, visit DPAC's website or the DPAC box office.