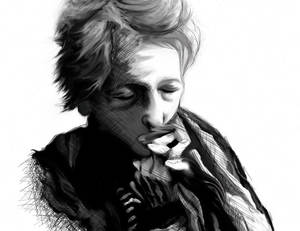 A sketch of Maria Irene Fornes by Amanda Denbeck

The University of Notre Dame’s Institute for Latino Studies, in collaboration with the Institute for Scholarship in the Liberal Arts, and the Department of Film, Television and Theatre, is seeking writers to participate in a one-week playwriting workshop, in the tradition of award-winning playwright Maria Irene Fornés, to be held in downtown Chicago.

Fornés is considered by many to be the “founding mother” of U.S. Latinx theatre, and the Fornés Playwriting Workshop will impart her playwriting methods to participants as they immerse themselves in her legacy over the course of one week.

Led by award-winning playwright and Fornés protégée Migdalia Cruz, an alumna of Fornés’s Hispanic Playwrights in Residence Laboratory at INTAR, the workshop will meet for four hours each day and will culminate in a public reading of selected scenes from workshop students by professional actors in Chicago.

Each selected writer will attend the workshop free of charge and will receive a $250 stipend to help with travel and lodging costs while attending. For those living outside the Chicago area, the workshop will assist in locating reasonably priced lodging.

The workshop will be coordinated by playwright Anne García-Romero, Associate Professor, in the Department of Film, Television and Theatre, at the University of Notre Dame.

Workshop participants will be announced by Tuesday, May 15, 2018

Maria Irene Fornés, nine-time Obie award winning Cuban-American playwright and director, founded and ran the seminal INTAR Hispanic Playwrights-in-Residence Laboratory in New York City from 1981 to 1992, where she trained numerous award-winning and widely produced Latina/o playwrights. Her students have won Obie Awards, National Endowment for the Arts Fellowships, a MacArthur Fellowship, and a Pulitzer Prize. Fornés went on to teach at some of America’s most prestigious universities, including Yale, Princeton, Brown, Wesleyan, and Iowa, and led workshops at leading theatres, such as the Mark Taper Forum in Los Angeles and the Traverse Theatre in Edinburgh, Scotland. Her plays include Promenade, Fefu and Her Friends, Mud, The Conduct of Life, Sarita, Eyes on the Harem, The Danube, Summer in Gossensass and Letters from Cuba.

Migdalia Cruz is a Bronx-born playwright, lyricist, translator & librettist of more than 60 works including: El Grito Del Bronx, Miriam’s Flowers, Latins In La-La Land, Satyricoño, Fur, Lucy Loves Me, Cigarettes & Moby-Dick, Another Part of the House, and Lolita de Lares, produced in several venues in Puerto Rico and elsewhere in the US, Mexico, U.K., Greece, Canada, Australia, Iraq, Turkey, Israel, Egypt, and in Chicago—Latino Chicago Theater Company, Urban Theater Company, Visión Latino, Teatro Vista, & CollaborAction. New Dramatists alumna, a 2016 NYFA Fellow, and the 2013 Helen Merrill Distinguished Playwright, she is also the recipient of two NEAs, a McKnight Fellowship, among other awards. She was nurtured by Sundance, the Lark & by her mentor, Maria Irene Fornés at INTAR. 2018 Projects: Spring—while teaching at Princeton, she wrote The Book of Miaou: Don’t Drink Everything Your Mother Pours You, for its Fornés Symposium in April.  Summer—She will lead the Playwrights’ Retreat for LaMaMa/Umbria in August. Fall—A modern translation of Macbeth for OSF’s “Play On! Project” will be produced in Boston & San Francisco, and in 2019 in NYC.

Anne García-Romero’s plays include Provenance, Paloma, Earthquake Chica, Mary Domingo, Mary Peabody in Cuba, Land of Benjamin Franklin and Girlus Equinus. Her plays have been developed and produced, most notably, at the Public Theater, O’Neill National Playwrights Conference, the Goodman Theatre, the Mark Taper Forum, the Los Angeles Theatre Center and South Coast Repertory. She received her MFA in Playwriting from the Yale School of Drama, where she studied with Maria Irene Fornés. She’s been a Jerome Fellow at the Playwrights’ Center and is an alumna of New Dramatists. She is an Associate Professor in the Department of Film, Television and Theatre at the University of Notre Dame where she teaches playwriting and theatre studies. She’s a Resident Playwright at Chicago Dramatists.