The Institute mourns the loss of Chicano luminary, Francisco X. Alarcón, who lost his battle with cancer on January 15th. Author of numerous books of poetry for both adults and children, Francisco X. Alarcón first visited Notre Dame in the Fall of 2002 as one of the featured poets at a Latino poets conference, co-sponsored by ILS.

“What I remember most about Francisco's visit to Notre Dame was how he so passionately performed his poems with incantations from the ancient Aztec tongue, the burning of copal, the scattering of sacred herbs, all of these brilliantly complementing his sinuous "snake" poems.  A veritable shaman, indeed, who will be greatly missed,” said Professor Orlando Menes, ILS Fellow and one of the principal organizers of the conference. 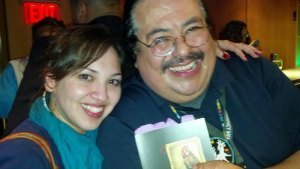 Alarcón made his second visit to campus in the spring of 2014 to read alongside Laurie Ann Guerrero, who he had selected as winner of the Andrés Montoya Poetry Prize—the Letras Latinas initiative that supports the publication of a first book by a Latino/a poet.

Alarcon’s ties with ILS deepened the following October (2014) when he served as facilitator of a writing workshop at the Crocker Museum in Sacramento, in tandem with “Our America: the Latino Presence in American Art,” a traveling Smithsonian exhibit—as part of Letras Latinas’ multi-year initiative, PINTURA : PALABRA, a project in ekphrasis.”

“It’s a huge loss not only for the Latino literary community, but for me as well, since he’d been a friend and mentor since the mid 1980s,” said Francisco Aragón, director of Letras Latinas and ILS faculty member.

Letras Latinas, in consultation with the U.S. Poet Laureate, Juan Felipe Herrera, bestowed upon Alarcón the first  Yolteotl Poet Laureate Award at a tribute in San Francisco on January 10, 2016. A posthumous tribute is slated for February 18 in Davis, CA.