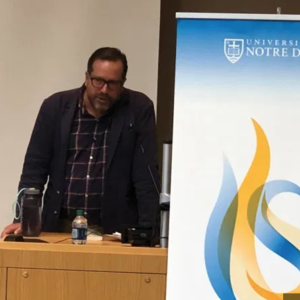 Todd Miller's lecture “Storming the Wall: Climate Change, Migration and Homelands Security,” an event co-sponsored by the Institute for Latino Studies as part of its Hispanic Heritage month programming, was featured in Notre Dame's The Observer.

During his Wednesday lecture, Miller, a journalist who has written a number of books on migration, "discussed the current environmental crisis, highlighting its impact on poorer communities across the globe and the increase in border fortification in developed countries as a result."

"While investigating the causes of widespread displacement in Central America, Miller met a number of farmers from Honduras journeying to America because they were unable to support themselves or feed their families because of a severe drought...

After speaking to empirical researchers connecting climate change and displacement, Miller said he learned that if the Earth continues to warm, staggering numbers of people will continue to migrate to developed nations to an extent without precedence in human history. However, with this mass exodus there will be nowhere for people to emigrate.

“There’s no climate refugee status,” Miller said. “If you look at the international definition of refugee, that is not included nor are the people who are suffering economic distress or economic violence.”

As a number of countries around the globe have undergone a massive increase of border militarization — including the United States — Miller said this trend will continue to accelerate, and the countries working to fortify their borders most aggressively are also the countries that have the greatest amount of greenhouse gas emissions worldwide."