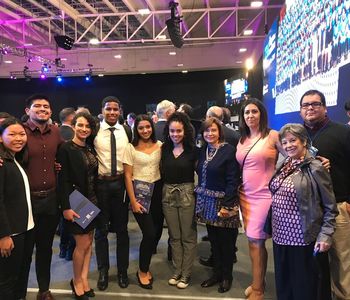 A group of six Latino Studies merit scholars from Notre Dame traveled to Mexico this summer in a cultural exchange trip organized by the Institute for Latino Studies. There, the LSSP scholars teamed up with students at the Monterrey Institute of Technology, popularly known as “El Tec,” at the university's Sante Fe campus in Mexico City. The El Tec students were part of the Lideres del Mañana (Leaders of Tomorrow) Program, which offers generous scholarships to low-income students from around Mexico to attend one of the 26 campuses comprising El Tec’s University System, considered one of the best in Latin America. This is the third year that Notre Dame Latino Studies students have participated in the trip.

In Mexico, the LSSP scholars learned about the university’s visionary initiatives and strategic plan for 2020 and beyond. El Tec’s leaders spoke about the Model Tec 21 initiative, which helps form future entrepreneurs by focusing on task-driven projects, such as building a business and other practical skills crucial in post-graduation life. At the same time, Model Tec 21 emphasizes a social responsibility component that addresses socio-economic inequality in Mexico and the world. Students also learned about El Tec’s thriving new office in Beijing, which intends to bring its students to the cutting edge of international technological commerce and scientific investigation. The Notre Dame scholars came away inspired by the experience.

“It was eye opening to see how committed they were towards creating a greater Mexico for the future,” said Gisselle Garcia, an incoming ND freshman and one of three new LSSP scholars. “This made me think about my role in ILS and my goal towards contributing to the Latinx community. I was filled with the desire to begin brainstorming for ideas on how I can slowly make my way towards a powerful and meaningful impact in my community.”

The group of Domers also took time for excursions around Mexico. They traveled to Teotihuacan to climb the Temple of the Sun pyramid and gaze at the valley from the pyramid’s height. Afterward, they visited a distillery for making mezcal and learned about the many modern and ancient uses for the maguey plant, from which mezcal is made. Students also traveled to the Museum of Anthropology in Mexico City, where a guide led them through the halls containing ancient mesoamerican stone figures and hieroglyphs, including the famed Sun Stone, otherwise known as the Aztec Calendar.

Besides Garcia (College of Science ‘23), the other new LSSP scholars, Nathalie Garcia (College of Science ‘23) and Aaron Baez (Arts and Letters ‘23) made the trip to Mexico, hailing it as an eye-opening experience. “I found it quite surprising how similar we were to the students of El Te,” said Baez. “We both wanted change and societal growth in our respective countries and some wanted to cross boundaries to change the world.”

Looking ahead, students brainstormed workshops and programs that ND students can help design for next year’s Lideres conference. One idea is the creation of social justice workshops where ND and El Tec students can collaborate on long-distance programs. Another is producing a video in which ND students creatively describe who they are and what their purpose at the conference will be. The ILS hopes to strengthen this burgeoning partnership with El Tec in years to come.