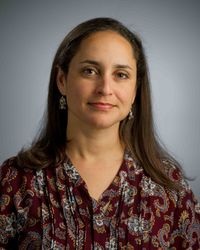 Marisel C. Moreno, Associate Professor of Romance Languages and Literatures and fellow of the Institute for Latino Studies, is the recipient of the 2016 Sheedy Excellence in Teaching Award. This award, bestowed annually on a faculty member in the College of Arts and Letters, is named for the Rev. Charles E. Sheedy, C.S.C., a much-beloved former dean of the College. It recognizes a faculty member who has demonstrated sustained excellence in teaching, informed by research, over a wide range of courses while employing innovative and creative teaching methods. For more information on this prestigious award, including a list of former winners, see:  http://al.nd.edu/about/the-faculty/sheedy-award.

Marisel graduated from the University of Pennsylvania in Philadelphia, PA with a B.A. degree in French. She earned her Ph.D. in Hispanic Literature from Georgetown University in Washington, D.C. Marisel was appointed an Assistant Professor in the Department of Romance Languages at Notre Dame in 2007 and was promoted to Associate Professor in 2013. She is also a Faculty Fellow in the Institute for Latino Studies as well as the Helen Kellogg Institute for International Studies and was a recipient of the American Association of University Women Fellowship in 2009-2010.

Marisel is a specialist in US Latino/a Literature and Latino-Caribbean authors. Issues of race, gender, and ethnicity are central to her work. Her first book, entitled Family Matters: Puerto Rican Women Authors on the Island and the Mainland, was published in 2012 as part of the New World Series of the University of Virginia Press. Additionally, she has published blogs on Huffington Post on community-based learning and other topoics, and she is currently working on her second book, provisionally titled Caribbean Borderlands and Undocumented Migration in US Latino/a Literature and Art.

In 2011, Marisel received the Indiana Governor’s Award for Service-Learning in recognition of “her pioneering work creating the first senior-level Spanish literature course in the College of Arts and Letters that features a required community-service component at La Casa de Amistad.” She has developed two service-learning or community-based learning courses: “Migrant Voices: US Latino Literature” and “Race and Ethnicity in US Latino Literature,” which were designed with course development grants from the Center for Social Concerns and the Institute for Latino Studies.

The letters written by those who nominated her and supported her candidacy for this award spoke eloquently of how she is “undoubtedly what every teacher should aspire to be.” A colleague who wrote on her behalf noted that “her teaching is innovative, bridging academia and community, making learning real through interaction with the surrounding community. . . . [Her courses] indeed expand upon the notion of [academic] ‘discipline’ and provide the students with opportunities for honing different modes of expression.” Her partnership with La Casa de Amistad reaches back more than 10 semesters, and while her students are, in one sense, the primary beneficiaries of this partnership through their learning experiences, they in turn have provided services that have benefited the entire South Bend community.

Please join us in congratulating our colleague, Marisel Moreno, for this well-deserved award.