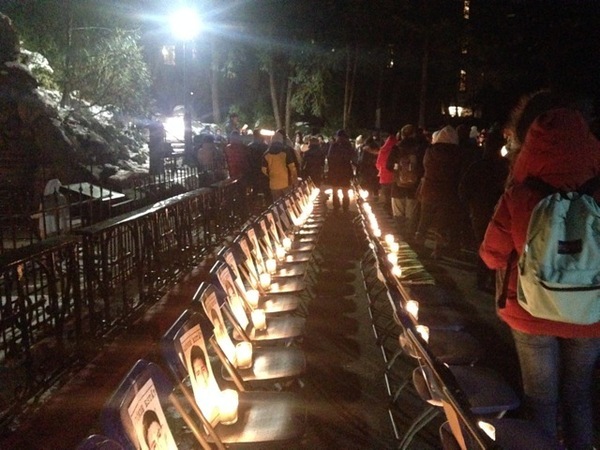 As the Ayotzinapa protest movement in Mexico and around the world continues to gain momentum, the Notre Dame student organizers wanted to bring awareness to the Notre Dame community. “We all felt a need to do something but we didn’t know what,” said César Soto, a graduate student in English and current president of the Latina/o Graduate Association at Notre Dame. Sister Olga Sanchez and Isaias Guerrero, both in the Master’s of International Peace Studies program, bumped into César at the library. They all expressed their feelings about Ayotzinapa and then tentatively suggested that something should be done. Thus, the Ayotzinapa Notre Dame Organizing Committee was born.

Sister Olga Sanchez, of the Comboni Missionary Sisters, expressed that when others started to join the cause, she “didn’t feel alone” and came to feel “blessed.” She also added that she believes in “PEACE and [that] we cannot make peace only [through studying] books, but also [through] our nonviolent activist commitment and networking.”

Political Science major Carolina Ramirez added, “Being part of a group that is as passionate about peace, justice and solidarity as I am has filled me with hope that our generation will continue to stand up for what is right.”

As word of the committee spread, more and more Notre Dame students asked if they could join. Guerrero sums up what has been echoed by other students: “I am a student and I would hate to lose friends of mine like that.  Students are the consciousness of a nation that helps steer governments toward truth.” The committee’s efforts have been channeled into writing a mission statement, organizing the vigil, and creating a video like those created by Harvard and Boston College, which have gone viral. In diffusing the video widely, organizers hope to raise awareness locally to put pressure on the Mexican government and authorities to respond to the families of the 43 kidnapped students who have likely been killed. 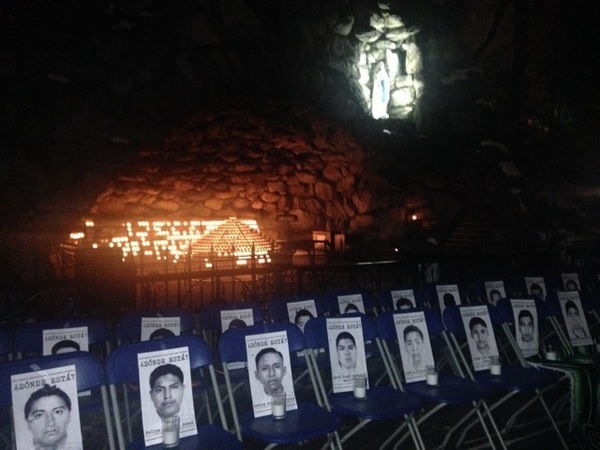 Timothy Matovina, Professor in Theology and Executive Director of the Institute for Latino Studies, explained why Ayotzinapa has struck such a chord within the ND community: “What happens to one, happens to all. The Ayotzinapa tragedy is a family matter that touches every home and every heart."

On September 26, forty-three students from the Ayotzinapa Normal School in Iguala (Mexico) were kidnapped by police, who reportedly were working in collusion with organized crime. Mass graves at the outskirts of Iguala were found containing the charred remains of 38 bodies. Though there is dispute over the identities of the bodies, it clear that massive governmental corruption is responsible for these and many other human rights violations. The Mexican government was slow to respond to the 43 missing students, a delay that has sparked a global protest movement. The main demands here and abroad are for the Mexican government to address the missing 43 students who are part of 20,000 other disappearances of innocent people in the past 8 years.

Notre Dame Professor of Romance Languages, Marisel Moreno, further affirmed: “As members of a higher learning institution, it's…unimaginable to think of 43 of our own students victimized for standing up against corruption and oppression.  Their commitment to education--they were studying to be teachers--despite their own marginality as members of a poor, rural, and indigenous community also reflects some of the social justice concerns that Notre Dame espouses.”

Carla Villanueva (a PhD student in History) poignantly described her personal history which threads through tragedies like Ayotzinapa: “As a student, as a Chicana and as a scholar, I feel a responsibility to stand in solidarity with the communities of Mexico. More importantly, as a daughter of a normalista rural who was involved in student organizing during Mexico's Dirty War, I feel a personal responsibility toward showing solidarity [against] the continued attacks on normales rurales.”