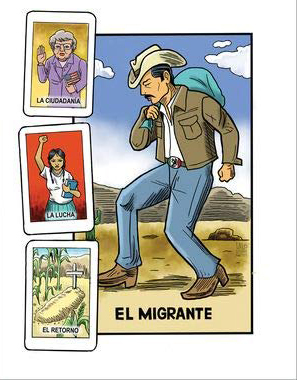 On Thursday, Notre Dame’s Institute for Latino Studies welcomes three renowned experts on immigration, and the social, political and cultural narratives about Latinos in the media for a panel discussion titled : Life’s Loteria: Immigration Narratives in Academia, Journalism, and Media.

While it is common for each to address audiences on the West Coast, Notre Dame offers a unique opportunity for these three figures to share the stage and to find themselves in front of a Midwest audience. ILS Faculty Fellow and Associate Professor of Political Science Ricardo Ramirez brings them together.

“Life’s Loteria engages three top scholars and professionals in an ND community discussion on how Latinos have been misrepresented and underrepresented in the media, and to learn how they have persevered and even thrived in an industry that has ignored or been hostile to immigrant narratives,” Ramirez said.

The panel discussion is timely in that controversial narratives made about Latinos in the 2016 presidential campaign increased in frequency and intensiveness in the runup to the midterm elections last week.

“This panel is what I call, ‘the ivory tower meets real world dialogue,’” Ramirez said. “It is important to recognize how the narratives we hear about Latinos and immigrants today are reflected or translated into the work we do in academia, journalism, and media. Notre Dame students can engage with the day-to-day voices that counter the negative stereotypes of Mexican and Latino immigrants and their children and grandchildren.”

Leading up to this event, the Institute for Latino Studies featured screenings of the films Selena (1995) and Coco (2017), in partnership with the DeBartolo Performing Arts Center. These two films portray accurate narratives and images of the Latino culture.

“We are very proud to support Professor Ramirez’s work. Given the significance of characterizations, unfortunately often very biased and misinformed, of immigrants and immigration policy in our current politics, it is important that our Notre Dame community become fully informed from multiple perspectives about the history and current reality of immigration to the U.S.,” said Luis R. Fraga, ILS Director. “The distinct venues of academic research, journalism, and social media through which the invited speakers work to help us better understand the aspirations and commitments of immigrant families will directly contribute to broadening and deepening our own perspectives on this issue that is so important to the future of our country and our Catholic Church.”

During the spring semester, the Institute for Latino Studies and the Institute for Scholarship in the Liberal Arts, will welcome Rita Moreno, Latina legend of stage, screen, and television to campus on February 21, 2019. This Transformative Latino Leadership Lecture will provide additional insight into the Latino experience.

Doors open at 4 p.m. with a light reception and art exhibit by Lalo Alcaraz in the Galeria America on the mezzanine floor of McKenna Hall at Notre Dame. The talk begins promptly at 5 p.m. in the McKenna Hall Auditorium.