A reception and book signing will precede the event in the East Lounge of McKenna Hall from 6:15-7:15 p.m.

LAURIE ANN GUERRERO is the author of, A Tongue In the Mouth of the Dying, a book that was profiled in Poets&Writers magazine. She is also the author of the award-winning chapbook, Babies Under the Skin. A native of Texas, her work has been published in many places, including Huizache, Texas Monthly, Bellevue Review, and Women’s Studies Quarterly. Her work has also been highlighted at Los Angeles Review of Books and The Poetry Foundation/Harriet Blog. Laurie is a CantoMundo fellow, as well as a member of the Macondo Writers’ Workshop. A graduate of Smith College and Drew University, her other distinctions include fellowships from the Alfredo Cisneros del Moral Foundation and the Arts Foundation of San Antonio.

FRANCISCO X. ALARCÓN is the author of twelve volumes of poetry, and a number of books of bilingual poetry for children.  A new collection of poems, Canto Hondo/Deep Song is forthcoming from University of Arizona Press. He has won many awards and fellowships, including the Danforth and Fulbright fellowships, the 1993 Carlos Pellicer-Robert Frost Poetry Honor Award, the 1993 American Book Award, the 1993 PEN-Oakland Josephine Miles Award, and the 1984 Chicano Literary Prize. In April 2002 he received the Fred Cody Lifetime Achievement Award from the Bay Area Book Reviewers Association (BABRA) in San Francisco. He teaches at the University of California, Davis. He is the founder of Facebook’s popular page, “Poets Against SB 1070.” 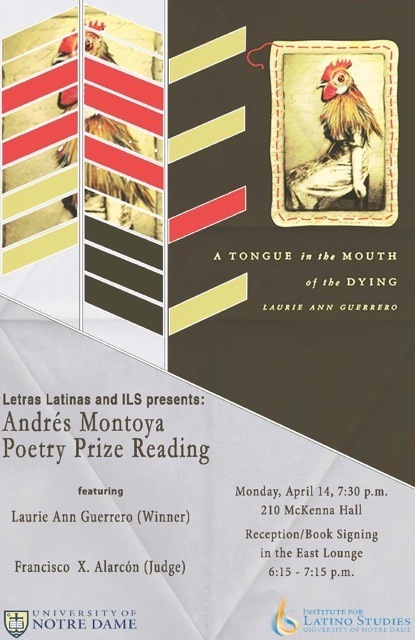