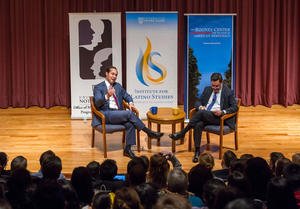 Under the directorship of Professor Luis Fraga, Rev. Donald P. McNeill, C.S.C., Professor of Transformative Latino Leadership, the Transformative Latino Leadership Lecture Series engages prominent figures in politics, entertainment, the arts, business, activism, the church, and other fields who present both their personal experiences and a vision of effective leadership in their sphere of influence.

This lecture series links Notre Dame with the “who’s who” of Latino leaders in the United States. The primary audience for the series is young leaders of all backgrounds and its primary purpose is to attract speakers who inspire and inform them about the possibilities, pitfalls, and principles they should know as leaders in our contemporary world.

Nieves is the President of the Fund for the City of New York (FCNY), an institution dedicated to advancing the functioning of government and nonprofit organizations in New York City and beyond. A social entrepreneur, public sector leader, and scholar, she most recently served as an Obama appointee on the White House Initiative on Educational Excellence for Hispanics. She gave a lecture at Notre Dame on April 11, 2022.

Congressman Gutiérrez was the first Hispanic Representative from Illinois. He served in the U.S. House of Representatives from 1993 to 2019. He is an outspoken advocate of workers' rights, LGBT rights, gender equality and other progressive causes. In 2021 he received a Lifetime Achivement– Excellence in Government Service Award from MALDEF. (Watch the video of his campus visit to the University of Notre Dame on March 23, 2022.)

Gutiérrez, an activist, attorney, and Professor Emeritus at the University of Texas, Arlington who has authored 18 books, visited the University of Notre Dame on March 2, 2022. He was founding member and president of the Mexican American Youth Organization (MAYO) and the Raza Unida Party. In 2019, he received the National Hispanic Hero Award from the United States Hispanic Leadership Institute in Chicago, Illinois. (Watch the video of his interview and conversation with ILS Director Luis Fraga.)

The President and General Counsel of MALDEF (Mexican American Legal Defense and Educational Fund), Saenz leads the organization’s efforts to promote the civil rights of all Latinos in the U.S., including defending President Obama’s deferred action immigration initiative before the U.S. Supreme Court in April 2016. He spoke at Notre Dame on Oct 3, 2019.

Moreno is a Latina legend of stage and screen and one of only 3 entertainers to achieve the EGOT (winning Emmy, Grammy, Oscar, Tony, and Peabody awards). Her career spanned more than 70 years in Broadway shows, studio films, and TV series. She is best known for her Academy Award-winning performance as Anita in West Side Story, as well as roles in The King and I, The Electric Company and Oz. Currenlty she stars in the show One Day at a Time. She spoke at Notre Dame on February 21, 2019. (Read more about her about her visit.)

The William B. Bates Distinguished Chair in Law and director of the Institute for HIgher Education Law and Governance at the University of Houston came to Notre Dame on April 1, 2019. Olivas was an instrumental figure in pushing for University of Texas' top 10% Plan and improving college access for DACA students. He spoke about the legal history of DACA and Deferred Action. (Watch the video of his lecture.)

The award-winning writer and master storyteller spoke about his exploration of love, loss, and triumph. Urrea is the author of the novels The House of Broken Angels, The Devil's Highway, and The Hummingbird's Daughter. He came to speak at Notre Dame on Oct 2, 2018. (Read about his visit and check out the video of his lecture.) 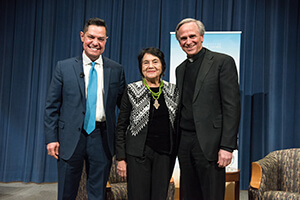 Dolores Huerta spoke at Notre Dame about her
experience as an activist and community organizer.

Huerta co-founded the United Farm Workers (UFW) along with César Chávez and is one of the most influential labor activist of the 20th century. She is president of the Dolores Huerta Foundation whose mission is to create networks of healthy, organized communities pursuing social justice through systemic and structural transformation.  She spoke at Notre Dame on February 13, 2018. (Watch the video and read more about Dolores Huerta's visit to Notre Dame.)

Archbishop of the nation's largest Catholic community. Vice President of the United States Conference of Catholic Bishops and appointed by Pope Francis to the Pontifical Commission for Latin America. He spoke at Notre Dame on October 3, 2017. (Watch the video and read more about the Archbishop's visit to Notre Dame.)

The first Latina U.S. Supreme Court Justice discussed a wide range of legal, intellectual, cultural and even personal issues arising from her life and career in a two-hour public conversation at Notre Dame on September 2, 2015. (View Justice Sonia Sotomayor video)