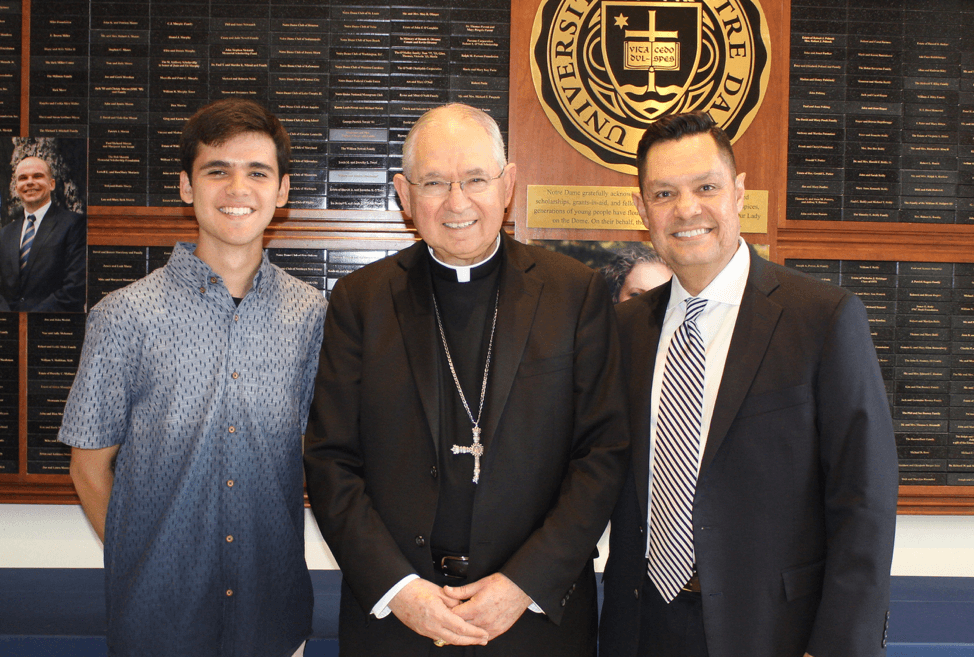 “Immigration is about more than immigration. It is about renewing the soul of America,” says highest ranking Latino leader in the U.S. Catholic Church, The Most Reverend Archbishop Jose H. Gomez, hosted by University of Notre Dame’s Institute for Latino Studies. Archbishop Jose H. Gomez believes that our country is facing a humanitarian tragedy as a result of our nation’s failure to address the immigration issue.

The Most Reverend Archbishop Jose H. Gomez, a native of Monterrey, Mexico, leads the nation's largest Catholic community: a community encompassing the counties of Los Angeles, Ventura, and Santa Barbara. The archdiocese of Los Angeles is composed of 5 million Catholics, 70 percent of which are of Latino origin. In addition to leading 287 parishes, Archbishop Gomez serves as the Vice President of the United States Conference of Catholic Bishops and was appointed by Pope Francis to the Pontifical Commission for Latin America.

Director Fraga explains, “Archbishop Gomez challenges all of us to understand the humanity of immigrant families through the lens of the teachings of Christ found in the Gospel.  He helps us see that all peoples are created in God's image...and God does not distinguish among us by race, nationality, or immigration status.”

The Institute for Latino Studies’ (ILS) Transformative Latino Leadership Lecture Series (TLLLS) initiative hosted Most Rev. Jose H. Gomez on October 2-4,2017, to share his experience as a transformative Latino leader in the United States. During his three day visit to the university, Archbishop Gomez celebrated three masses, met with Rev. John I. Jenkins, C.S.C., President of the University of Notre Dame, conversed with the ILS Faculty on issues of immigration and faith, and shared his life experiences with the Notre Dame Community in an in-depth interview with ILS Director, Luis R. Fraga.

Having previously championed Catholic education from San Antonio to Los Angeles, Archbishop Gomez, visited Holy Cross School, where ILS has partnered to establish the area’s first Catholic Pre-K to 8thgrade school, with a dual Spanish-English immersion program. He participated in a reading circle with two of the Pre-K classrooms and joined the students in song. “It was an honor to have Archbishop Gomez visit our school. It was an excellent opportunity to explain to our students who he is and the importance of his role in the Catholic Church. Our students were impressed by his humbleness despite being the Archbishop of the nation’s largest Catholic community. With admiration our students listened to his homily and when he told us he would mention this visit to Pope Francis in a couple of weeks, our students were speechless,” shared Angela Budzinski, principal of Holy Cross School.

The Spanish-English immersion program is the result of a collaboration with the University of Notre Dame’s Alliance for Catholic Education (ACE) and Institute for Latino Studies. Katy Walter Lichon, Director for the English as a New Language (ENL) Program at the University of Notre Dame’s ACE expands, "As we find ourselves in a world profoundly in need of peace, unity, and understand, as reiterated by the archbishop, there is no better place to begin to change the world than with our children and the formation of future saints. Our partnership with ILS is intentionally fostering a school environment in which our children are learning to embrace each other's languages and cultures, and this is the first step in creating bridge builders.

On October 3rd, Archbishop Gomez celebrated mass at the university’s Basilica of the Sacred Heart. The next day, ILS Director Luis Fraga moderated a conversation with Archbishop Gomez where they discussed his 2013 book, Immigration and the Next America: Renewing the Soul of Our Nation.“More than half of American Catholics today under the age of 25 are Hispanic,” he asserted. If the fastest growing Catholic population, the Latino community, is left out, he explained our leaders cannot fully understand the future of America and the Catholic church. Archbishop Gomez fully describes this stance.”  The Archbishop’s position on immigration challenges both political parties and reiterates the importance of including and prioritizing the Latino community while shaping U.S. the Catholic church.

As the Archbishop leading the largest Catholic diocese in the nation, and the most concentrated Latino population, Archbishop Gomez’ visit marks an important milestone in Transformative Latino Leadership Lecture Series. ILS Director Fraga closed his visit with, “In the end, Archbishop Gomez's writing empowers us to put the Gospel into practice. All we need is the courage to do so.”