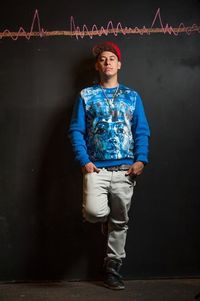 Olmeca, Hip-Hop artist and activist, will perform and present “Dignity, Fearlessness, and Hip-Hop Stories of a Mexican Diaspora.”

David "Olmeca" Barragan is a renowned hip-hop artist, activist, and producer who draws on his upbringing in the barrios of Los Angeles and Mexico to give voice to the history, struggles, and resilience of the Latina/o community. His music has been featured on CNN Latino, ABC, Fox, NPR, and the television series "Sons of Anarchy." He has both collaborated and shared the stage with Grammy Award winners Ozomatli, the legendary KRS-One, Jenni Rivera, Dilated Peoples, and Ana Tijoux, among others. His advocacy work around human rights, particularly the issue of undocumented immigration, has paired him with the likes of Dolores Huerta, Naomi Klein, Emory Douglas, and Zack de la Rocha at political rallies and in university settings.

The event is free and open to the public.