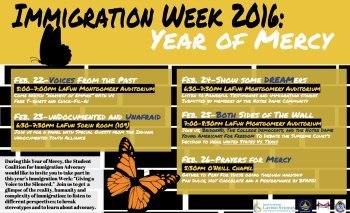 The Student Coalition for Immigration Advocacy (SCIA) would like to invite you to take part in this year's Immigration Week events, Year of Mercy: Giving a Voice to the Silenced. All are invented to join them for a glimpse of the reality, humanity, and complexity of immigration; to listen to different perspectives; to break stereotypes and to learn about advocacy. Events being held the week of February 22-26th include–

Monday, February 22: Voices from the Past
5:00–7:00 p.m., Montgomery Auditorium, LaFortune
Screening of documentary Harvest of Empire. The documentary looks at the long history of U.S. intervention in Latin America that has contributed to the immigration crisis we face today. The documentary provides a glimpse into the sacrifices and triumphs of our nation's growing Latino Community.

Tuesday, February 23: Undocumented and Unafraid
6:30–7:30 p.m., Sorin Room in 109 LaFortune
A panel discussion in which recent Saint Mary's graduate, Dara Marquez, and a few students representing the Indiana Undocumented Youth Alliance will speak about their experiences as undocumented students and their involvement in advocating for immigration reform.

Wednesday, February 24: Show Some DREAMers
6:30–7:30 p.m., Montgomery Auditorium, LaFortune
Listen to powerful testimonies and immigration stories submitted by members of the Notre Dame community. A series of speakers and actors will present personal narratives regarding immigration in the hope of breaking immigration stereotypes, understanding the stigma and the reasons why people immigrate.

Friday, February 26: Prayers for Mercy
5:30 p.m., O'Neill Chapel
Immigration week will end with a prayer service in the Chapel of St. Joseph in O'Neill Hall. A gathering to pray for those who are going through hardship, followed by pan dulce, hot chocolate and a performance by Ballet Folkórico Azul y Oro.