Join the Center for Social Concerns for a discussion of the human rights issues at the U.S./Mexico Border with members of No More Deaths, a humanitarian group active in the region. 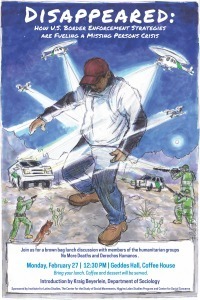 Introduction by ILS faculty fellow Kraig Beyerlein, associate professor, Sociology. No More Deaths is a humanitarian organization based in southern Arizona. It began in 2004 in the form of a coalition of community and faith groups, dedicated to stepping up efforts to stop the deaths of migrants in the desert and to achieving the enactment of a set of Faith-Based Principles for Immigration Reform. It later developed into an autonomous project. Since 2008 we have been an official ministry of the Unitarian Universalist Church of Tucson. ​

An event sponsored by Institute for Latino Studies. Cosponsored by Center for Social Concerns.

Brown bag lunch, coffee and dessert will be provided.