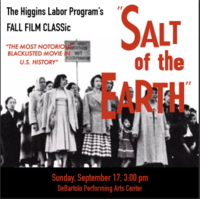 Released in 1954, this Cold War labor classic provides a fascinating -- and more labor-friendly -- counterpart to On the Waterfront (the Oscar winner for best picture that year). Recreating an actual 1951 strike by Mexican-American zinc miners, the film is noteworthy on several counts: it was made by a film crew blacklisted by the Hollywood studios, it starred real workers and their families as characters, and it engaged in questions not only about unions and labor rights but gender equality in the household [Watch the original trailer].

This film brought to you by The Higgins Labor Program's FALL FILM CLASSic and the DeBartolo Performing Arts Center is co-sponsored by the Institute for Latino Studies and the Gender Studies Program, the screening will be followed by an open audience discussion.

This event is free but ticketed, so please RSVP here. The Higgins Labor Program will provide complimentary snacks and popcorn!