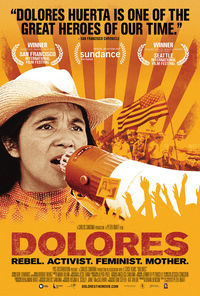 In preparation for Dolores Huerta's visit on February 13th the Institute for Latino Studies will screen, Dolores, the movie at Browning Cinema in the DeBartolo Performing Arts Center on Saturday, February 3 at 3 p.m. The film will also be shown at 3 p.m. on Sunday, February 4. Tickets can be purchased online or by calling the DeBartolo Performing Arts Center ticket office at 547-631-2800.

Dolores Huerta is a Mexican-American leader who's devoted her life to human rights issues. Co-founder of the United Farm Workers (UFW), she is one of the most influential labor activists of the 20th century and a leader of the Chicano civil rights movement. Huerta will be speaking at the University of Notre Dame on issues of leadership, social justice, and public policy.