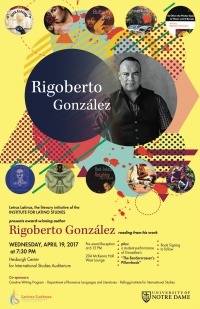 Letras Latinas, the literary initiative at the Institute for Latino Studies, is pleased to present an evening with Rigoberto González. Author and editor of seventeen books in multiple genres, and winner of numerous awards, González will be reading from his work on Wednesday, April 19 at 7:30 PM in the Hesburgh Center for International Studies Auditorium with a pre-event reception to take place at 6:15 PM in the west lounge on the second floor of McKenna Hall.

A native of Bakersfield, CA and raised in Michoacán, Mexico, Rigoberto González is the son and grandson of migrant farmworkers. Educated at UC Riverside, González went on to earn graduate degrees in creative writing from UC Davis and Arizona State University and is currently a full professor in the English Department at Rutgers University-Newark. His most recent collection of poetry, Unpeopled Eden (Four Way Books, 2013) was the recipient of the Lenore Marshall Prize from the Academy of American Poets. He is also the author of the forthcoming book, Pivotal Voices, Era of Transition: Towards a 21t Century Poetics (University of Michigan Press), a collection of critical essays, book reviews, and speeches. Other distinctions include fellowships from the Guggenheim Foundation and the National Endowment for the Arts. In 2015, he was the recipient of the Bill Whitehead Award for Lifetime Achievement from the Publishing Triangle.

“Rigoberto González is, easily, the most important Latino/a writer of his generation when taking into account the multiple areas in which he has distinguished himself. First and foremost, he’s a poet, but he’s also one of the most influential critics today, writing for such places as The Los Angeles Times and NBC Latino, not to mention his many years on the board of the National Book Critics Circle. He also holds the distinction of having written over 200 book reviews for the El Paso Times during his tenure as a critic there. And did I mention that he has written YA novels and children’s books, as well as an award-winning novel and memoir?” said Francisco Aragón, director of Letras Latinas. “I’ve been wanting to bring him to Notre Dame for years, and am pleased that our campus community and students will finally be able to experience his work and person first hand,” Aragón added.

The event on April 19 is free and open to the public. Hammes bookstore will be on hand for book sales.

Co-sponsors include: the Institute for Latino Studies, the Creative Writing Program, the Department of Romance Languages and Literatures, and the Kellogg Institute for International Studies.

To read a recent piece by González in The Los Angeles Times, visit:
http://www.latimes.com/books/jacketcopy/la-ca-jc-rigoberto-gonzalez-20170216-story.html