ILS congratulates John Phillip Santos on his reception of The Anthony J. Lauck Award from the Notre Dame Alumni Association. John Phillip has been a favorite among our students during his various visits to campus for ILS events, and we are grateful he has received this prestigious recognition. 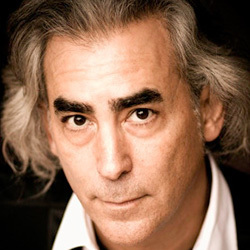 In recognition of his distinguished work as an author, filmmaker, journalist, and producer, John Phillip Santos ’79 is honored with this award.

A native of San Antonio, Santos earned a B.A. in Philosophy and Literature from Notre Dame. He was the first Latino to be elected as a Rhodes Scholar and holds degrees in English Literature and Language from Oxford University.

Santos is a widely published author and media producer who has produced documentaries and news programs in sixteen countries for CBS and PBS.  His work has appeared in the New York Times, the Los Angeles Times, the San Antonio Express-News, the Manchester Guardian, Texas Monthly, and numerous other publications in the U.S., Mexico, and Europe. Santos was a program officer in Media, Arts and Culture at the Ford Foundation, where he managed $40 million in grants supporting media productions and the creation of public interest channels and networks in the United States and throughout the developing world.

Since 2010, he has been the University Distinguished Scholar in Mestizo Cultural Studies, teaching in the Honors College at the University of Texas San Antonio. He lives in San Antonio with his wife, the poet Frances Treviño Santos, and their daughter, Francesca de la Luz.

I’m deeply moved to receive this recognition from the Alumni Association. Thanks to the support of the community of colleagues and professors I found there, Notre Dame was the place where I became a writer, for which I’ll be ever grateful.